It was around the time when the rabbit mask had dried up after taking a bath.

“I heard you were in the rain with the lady.

What is going on”

Dana rushed over and blocked between Aria and Lloyd.

Perhaps it was while she was sleeping, her usual neat appearance was nowhere to be found, her hair was out of shape and her attire was a mess.

“Did you threaten her again”

Dana noticed the subtle tension between the two and asked.

‘Well, I felt a death threat.’

It was her fault anyway, so Aria grabbed Dana’s hem and shook her head.

Lloyd didn’t seem to care whether he was misunderstood or not, he was just staring fiercely at Aria.

If he had been able to kill people with his eyes, she would have already been stabbed to death.

“You two… what happened”

Dana knew the boy well as she had once been Lloyd’s nanny.

Even in her eyes, Lloyd’s momentum was not normal.

Dana looked at the two of them in turn and made a puzzled expression.

Is this calling her

Lloyd looked like he was about to burst into anger, then swallowed his emotions.

He then rubbed his own cheek with his palm.

Although he immediately returned with a nonchalant look on his face, as if nothing ever happened. 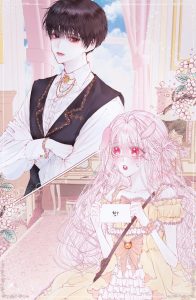 Aria held up her card and asked again, as if she didn’t expect the word at all.

Because she thought that it wouldn’t be the first time for a kiss on the cheek.

If it was a noble son, a light kiss on the cheek would have been accepted as a greeting.

However, Lloyd, who looked uncomfortable, took her card, ripped it to shreds and threw it away.

“Why do you want to marry me that much”

She explained why she came to the Grand Duchy.

Simultaneously with her question, the bloody gaze was removed and it began to shine sharply without emotion.

‘He’s going to make a decision based on my answer now.’

Was he going to kick her out of the castle, or will he keep her by his side

[I want to bring back the happiness that the person who saved me could have enjoyed.]

Her own honest feelings.

The boy asked a beat late.

And he narrowed his eyes.

As if doubting that he had read her card correctly.

Suddenly, a thumping sound was heard and an employee opened the door.

“Gre, great thing… No, a miracle has happened! Madam has risen from the sick bed!”

The timing is coincidental.

Lloyd turned to Aria with a hard expression on his face, then asked.

“Have she crossed the crisis”

“What else is that”

Lloyd asked with a vicious force.

And he strode over and placed his hand on the handle of his sword.

It’s like he’s going to slash his throat off if it’s nonsense.

“Her body was weakened due to a long illness, but other than that, she is said to be in good health.

As if the disease had disappeared…”

Lloyd followed the employee and hurriedly left the place.

Dana also asked Aria for a pardon and quickly followed the boy.

Aria looked at their backs and was relieved.

For some reason, her eyes were blinking.

She slumped her body as if she had collapsed on the bed.

Aria’s physical condition was the worst.

It was the first time she had been so sick since turning back time.

She forcibly opened her core, sang a healing song, and then got hit by the rain, so it was actually strange that she was fine.

“Did you faint again”

Lloyd’s consideration for pushing her to a bath to avoid getting sick was useless.

It was a name she got used to after hearing once.

Lloyd was facing the intense sunlight penetrating the window.

Perhaps it was because she was overwhelmed by the fever, his expressionless face was particularly dazzling.

Lloyd suddenly reached out to her.

Aria’s shoulders trembled as he touched the rabbit mask as if he was going to take it off.

The boy wiped away the tears, not the mask.

Only after seeing the tears on the tips of his fingers did Aria realize she was crying.

‘I must have cried because of the pain.’

It was physiological tears.

Aria was relieved that she hadn’t made a single sound of pain, even though she was in pain as if her insides had been turned over.

That’s why habits are scary.

As Lloyd said, the rabbit’s mask was wet with tears or sweat.

“You have a fever.

It’s better to take it off.”

“I have to know the face of the person who will be my wife.”

He had a bitter expression on his face even though he had said it himself.

Aria, who heard those words, had a similar expression.

‘I’m the one who forced you to marry me because we’ll get a divorce in 10 years, but….’

The silly word ‘wife’ seemed to circulate without melting between the two of them.

Aria hesitated, blinking her hot eyes, then flapped her lips.

– Are you going to do it

She thought he might really kick her out of the castle this time.

By this time, Aria had no choice but to notice.

Even more so for those who are weak but don’t spare their own body.

It wasn’t her intention, but he kept seeing his sick mother over and over in her.

She did a terrible thing.

She thought it was unavoidable if the boy pushed her away because he didn’t want to see her.

-I wasn’t sick with the intention of bothering you.

You just can’t take care of your wounds.”

“You’re an idiot who doesn’t even know you’ve been hurt.”

What do you mean idiot

Still, it’s a better treatment than receiving death threats and being told to go.

From the first time Lloyd met her, he called Aria a rabbit.

Besides, she always wears a rabbit mask.

It was a disrespectful expression.

But Aria was relieved on the contrary.

The sound of the words in her memory of murmuring that she was a hideous demon seemed to fade little by little.

She could not hide her face for the rest of her life from whomever she would marry.

Aria dropped her eyelashes, pensive in her thoughts, then licked her lips.

– Aren’t you going to chase me away

It was a question of whether she could just pass as a rabbit as she was now, no matter how ugly she was.

A nickname that mixes indifference and childish playfulness.

Aria looked up at Lloyd, who looked complicated in many ways, and carefully fumbled through her mask.

And she slowly pulled it down.

The cool breeze brushed against her wet face in cold sweat.

‘I must have gotten more ugly because I’m ill.’

Aria felt that she was suddenly terrified, but at the same time convinced that she had nothing to worry about.

What was she worried about

He doesn’t want anything.

Someone who doesn’t value anything.

‘I was the first to find out.’

A ray of light leaked through the cracks in the window and draped over her face.

Long, pure white eyelashes hung and fluttered like the flap of a butterfly’s wings.

But Lloyd looked at her face and looked away without a word.

And he put the towel over her eyes.

Aria blinked again and again under the wet towel.

Even though they know each other’s names, he thought they should just do that.

‘Come to think of it, I haven’t even told him my full name yet.’

Aria thought her reunion with him was a mess in many ways, and she licked her lips.

As if it was engraved in his mind.

Oh, and another name change haha! Lloyd’s middle name was translated as Cardence in the previous tl but I’m changing it to Cardenas 카르데나스 ~