Marronnier said, sticking her head out from behind her back.

You know the saying that when you fall in love, that person looks the most beautiful in the world I fell in love the moment I saw you, Young Madam.”

It was an unexpected love confession.

It was also the most pure and lovely confession of love in the world.

Aria in the mirror rolled her eyes like a rabbit and smiled.

Then Marronnier hugged her behind her back and said,

“So, I want Young Madam to please love the person in the mirror.”

“So that my love won’t be pitiful.

The person in the mirror.

She looked in the mirror and saw very bright pink eyes.

The color was so brilliant that it could be believed to have been made with a delicate pink sapphire.

Her hair, which looked just as white as snow, shimmered in a pale pink color as the sun shone over her head.

‘The face I always see in the mirror.’

Homever, it seems she had never tried to look closely.

‘My eyelashes are incredibly long.’

Although the pigment is close to white, it is inconspicuous.

‘Eyes that are clear and large.’

That’s why it seemed to give a more mysterious impression.

‘The facial features are well balanced, and the corners of the mouth are pretty when I smile.’

And both cheeks were always blushing rosy.

It is not a standardized beauty image.

But there was definitely a unique beauty.

Aria seems to understand why people call her a fairy just by looking at her.

It was the first time she had had such a thought, so she looked even more carefully.

Even if everyone in the world criticized her for being ugly, it would have been enough if only her people told her that they loved her.

She doesn’t know yet what it means to love herself enough to make her look the prettiest in the world.

She had a strong conviction that if she spent time with her people like this, sooner or later she would find out.

Aria turned her back and hugged Marronnier tightly.

Then Marronnier smiled ‘hehe’ and said that I love you again.

“Have you confessed your love to my bride now” 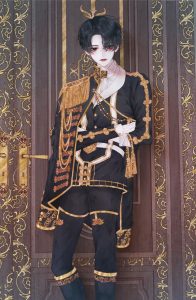 The boy who stopped by the bride’s waiting room just in time tilted his head slowly.

“Tell me if you’re a couple.

Marronnier sighed and hid behind Aria’s back.

Although she was taller than Aria, so she was not hidden at all.

The girl, who trembled like a prey when she had found a natural enemy, whispered softly.

“I don’t think my love is deep enough to accept the duel of the Grand Prince.”

Both of them were making serious jokes.

Aria grinned and walked over to the boy who was leaning on the doorstep with his arms crossed.

‘Usually, he only wore a white shirt and black pants neatly.’

He looked like a different person when she saw that he was wearing a fancy robe.

And the hair that was messed up without taking care of it at all.

Today, the hair was properly arranged, and the curls were like waves.

‘Oh, there’s a mole under the right eyebrow.’

She didn’t know because he had been covering it with his bangs all this time.

Aria was a little embarrassed.

Lloyd also looked at Aria and was silent for a moment.

Her skirt was inflated with frills, and her waist was accented with a cute ribbon.

It was a wedding dress designed with a cute feeling rather than a flashy and elegant one.

‘Because I was still a ten-year-old kid.’

It was created by Grand Duke Valentine by inviting the best designers in the capital.

The hair that came down to the waist was neatly arranged with perfume oil.

On top of it was a crown-shaped decoration made of platinum and diamonds.

Aria hasn’t worn makeup yet, but she was lightly dusted with the glittering pearl powder over her eyelids.

To be honest, today’s Aria was a bit pretty even for herself.

‘I’ve never thought of myself as pretty, even once in my life, but it’s pretty good if I look pretty.’

It was when Aria tilted her head.

Lloyd covered her face with a veil.

Aria gently lifted the veil that covered her eyes and looked at Lloyd.

I think Lloyd is the most beautiful in the world.’

A painting called ‘Ink Painting’ from the eastern continent came to mind.

She’s only seen it once, and the contrast between black and white was so sharp that it was a static and neat style of painting.

If Lloyd had looked in the mirror, he would have seen his change yet wouldn’t have reacted at all.

Aria flapped her lips and praised the boy outright and frankly.

Then, the handsome young man’s eyes instantly turned into a beast.

His face wrinkled disgustingly, and Lloyd, who hurried over, lifted Aria straight up.

She was about to scream.

Aria covered her mouth and opened her eyes wide.

“Who are you saying pretty to”

“You should look in the mirror and talk”

What is that Aria bit her lip, thinking she might burst into laughter.

“What is that expression”

He didn’t seem to be aware of what he was saying.

‘I wonder how he will react if I mention today’s event after he grows up.’

Just in time, Dana seemed to be busy filming them with the video sphere.

She was making evidence that could not be refuted.

‘Someday I’ll have to tease you.’

Lloyd, unable to understand Aria’s plans, said with a small click on his tongue.

“I thought you gained weight.

He headed to the soon-to-be ceremony venue, holding Aria.

Aria started to panic belatedly at that time.

I have no intention of entering in such a conspicuous way.’

As she struggled, Lloyd grabbed her even tighter each time she did.

‘Why are you so strong’

She still thought he was tall and skinny because he was a young boy.

She was held in his arms, so his muscles were blatant.

Because of that, she really couldn’t move.

And she chose to cover her face, which was hot red, with both her hands.

After many twists and turns, the wedding started safely.

Since the bride and groom were young, the ceremony was omitted as briefly as possible.

And Aria couldn’t even recite her wedding vows.

However, Lloyd, the mastermind behind the wedding, seemed to have no care whether or not it was a formality.

‘It’s a wedding that was hosted at the risk of being seen as a sign of treason to the emperor.’

Aria’s existence was widely known to the world, so the rest doesn’t really matter.

‘Then he has achieved his desired purpose properly.’

Because Lloyd touched the privileges of the heirs to the throne, and now it is a wedding that will go down in history.

Aria shook her head in her heart.

They exchanged rings with each other in the prayer room of the Grand Duke’s castle.

“Rabbit, reach out your hand hurry.”

Is this really the new groom’s way of talking

It’s just a formal marriage, but she wanted to make it feel like it was supposedly something.

When Aria made a sulky expression, Lloyd raised his eyebrows in response.

The boy carefully placed the ring over the white gloves she was wearing.

Lloyd looked at the ring on Aria’s hand and put a satisfied smile on his lips.

‘It’s not like he was happy to welcome me as a bride.’

Aria was puzzled, and she looked down at the ring she was wearing.

It was a deep blue diamond.

It got its name because it sparkles like star dust sprinkled on the dark night sky whenever it receives light.

‘No matter how the Valentine’s family is, it’s such a high-priced jewel for a wedding like a child’s play that will soon be divorced.’

However, upon closer inspection, it was something different from ordinary jewellery.

Like the fluctuating Milky Way, the inside of the jewel shook constantly.

This was an artifact with magic.

“Close your eyes and imagine you’re communicating your thoughts to me.”

– Is it only for Lloyd

Aria opened her eyes gently, then looked around the ring with curious eyes.

Have you ever used magic You learn it so quickly.”