Why Are You Obsessed With Your Fake Wife CH 35.1

“With how cowardly Count Altair is, he will always strive to save his own neck.

Once the castle wall is breached, he will immediately judge that defending the castle is impossible, and promptly escape through the south gate.

If so, there are five possible routes he could take.”

Glenn continued speaking, while pointing out the five routes on the map.

“The road is a bit dangerous, but if he takes either of the routes leading to the southwest or west, he will quickly come face to face with our forces.”

“Is my lord thinking of laying ambush on both roads”

“No, we do not have that many men at our disposal.”

If the army were to be divided into three prongs, not only would it be difficult to guarantee the victory of the center prong, the enemy forces could also become aware that many of the Winterfell troops were missing.

It was safer to not risk having the enemy forces see through their numbers.

“Set up an ambush at the point leading to the southwest road.

But in addition, tie some bales of straw to the horses tails so that they raise up clouds of dust.

You have to make him think that a great number of troops are waiting for him here.”

“……we should stir up lots of dust on the southwest road, but also lay ambush there”

“But if we do that, won’t the count become aware of our location He will run off in another direction.”

“Once the castle wall falls, he would have already fallen for our trick once.

He will be afraid that there is yet another trap laid for him and try to save himself, and will think that it is just another trick to steer him south.

After much doubt, he will decide to take the southwest road.

By thinking too deeply about it, he will fall right into our hands.” [1]

The knights nodded their heads in turn, as though they finally understood.

Glenn pointed his staff at the southwest route and continued on.

There is a high possibility that Count Altair will go through this road.

No, he definitely will.”

He predicted that that would be the sure outcome.

With his conviction, Nadia too nodded her head unknowingly.

‘As expected, he’s got some skill.

He will be worth having as a partner in revenge.’

Right before she had died so unjustly in her past life, tensions between the southern and northern regions had been at an extreme high.

It had been due to conflicts over who would succeed the throne after the king had died suddenly without picking an heir.

Even Duke Balazit matching Lee Jiho with his daughter Callain had something to do with it.

‘Anyway, what is important is that there will definitely be a civil war.”

That being the case, what Nadia needed was someone who could help her move money and troops according to her instructions, and lead troops into battle in her stead.

No matter how much she knew about the future, leading an army and going into battle was out of the scope of her skills.

“That is a good idea.

If it all goes according to plan, taking possession of the battlefield around Vallon castle is also possible….”

“But only if Madam’s words are true.”

Of course, it was Giscard who interrupted her to make unnecessary comments.

Yes, she understood why he was guarded against her.

However, she had definitely not given him any reasons to feel irritated at this point.

‘Let’s just wait and see what you will say to me after this.’

She swallowed her annoyance and spoke, a corner of her mouth lifted.

“Then, you first have to check if I am right.

Shall we dig first”

Occupying high ground on the battlefield was a great advantage.

It not only made using long range weapons easier, it also made seeing the opponents’ movements effortless.

Because of this, Vallon castle’s walls were used both for defense and as a look-out.

“My lord, the enemy forces are building an Earth Mountain.” [2]

At the moment when he got the report, Count Altair had been lying on a chaise in the master bedroom, sipping on some wine.

The greasy snacks next to him completed the setting. [3]

He lifted his upper body as he asked.

“An Earth Mountain As in, they are piling up soil”

Count Altair took on a look of anxiety as he pondered the enemy force’s action.

‘Damn it! They are supposed to return soon for the farming season, so what rubbish siege are they planning!”

He had thought that if he dragged out the time enough, they would quit and return home.

But now it seemed that they had not given up wanting a complete victory.

However, his fretting only lasted a short while.

The count let out a scornful laugh, as though he had figured out the intention of the enemy general.

“That greenhorn must be short on time, so he has turned to some foolish tricks.”

Their reason for building the Earth Mountain was obvious.

They also wanted to gain the advantage of high ground.

That rookie who had just inherited his title – he had long forgotten the fact that he’d suffered crushing defeat from said rookie – that rookie had made a good judgment.

The count rubbed his chin while in deep thought.

He spoke after a short moment.

“Of course we should! Arrange the archers and the catapults on the west wall! You have to crush them completely.”

Count Altair grinned as if he were happy.

Even after hearing that he was being attacked by enemy forces, there was not a trace of anxiety in his heart.

On the contrary, from his perspective, the whole thing was cause to celebrate.

[1] Since they would have breached the north wall and attacked by then, Altair will think that most of their troops should be stationed at the north side and definitely not at the south west (at least, not enough to raise up so much dust).

He will think there are actually very few soldiers there (which will in fact be true), and run in that direction.

And then get caught. 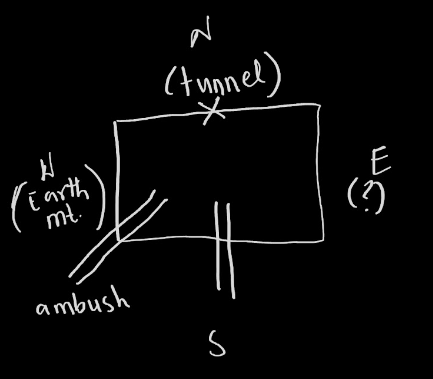 [2] The correct honorific for a count in English would be “Your Excellency”, but “my lord” is used here for ease.